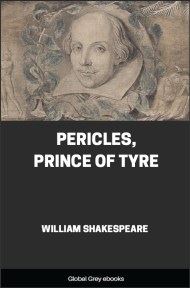 Pericles, Prince of Tyre is a Jacobean play written at least in part by William Shakespeare and included in modern editions of his collected works despite questions over its authorship. The play draws upon two sources for the plot. The first is Confessio Amantis (1393) of John Gower, an English poet and contemporary of Geoffrey Chaucer. This provides the story of Apollonius of Tyre. The second source is the Lawrence Twine prose version of Gower's tale, The Pattern of Painful Adventures, dating from c. 1576, reprinted in 1607.

This book has 121 pages in the PDF version, and was originally written in 1608.

Production notes: This ebook of Pericles, Prince of Tyre was published by Global Grey in 2018.