Out from the Heart is a book by James Allen, first published in 1904. It is a sequel to As a Man Thinketh.

This book has 26 pages in the PDF version, and was originally published in 1904.

Excerpt from 'Out from the Heart'

AS THE HEART, SO IS THE LIFE. The within IS ceaselessly becoming the without. Nothing remains unrevealed. That which is hidden is but for a time; it ripens and comes forth at last. Seed, tree, blossom, and fruit are the fourfold order of the universe. From the state of a man’s heart proceed the conditions of his life. His thoughts blossom into deeds; and his deeds bear the fruitage of character and destiny.

Life is ever unfolding from within, and revealing itself to the light, and thoughts engendered in the heart at last reveal themselves in words, actions, and things accomplished.

As the fountain from the hidden spring, so flows forth a man’s life from the secret recesses of his heart. All that he is and does is generated there. All that he will be and do will take its rise there.

Sorrow and happiness, suffering and enjoyment, fear and hope, hatred and love, ignorance and enlightenment, are nowhere but in the heart. They are solely mental conditions.

Man is the keeper of his heart; the watcher of his mind; the solitary guard of his citadel of life. As such, he can be diligent or negligent. He can keep his heart more and more carefully. He can more strenuously watch and purify his mind; and he can guard against the thinking of unrighteous thoughts—this is the way of enlightenment and bliss.

On the other hand, he can live loosely and carelessly, neglecting the supreme task of rightfully ordering his life—this is the way of self-delusion and suffering.

Let a man realize that life in its totality proceeds from the mind, and lo, the way of blessedness is opened up to him! For he will then discover that he possesses the power to rule his mind, and to fashion it in accordance with his Ideal. So will he elect to strongly and steadfastly walk those pathways of thought and action which are altogether excellent. To him, life will become beautiful and sacred; and sooner or later, he will put to flight all evil, confusion, and suffering. For it is impossible for a man to fall short of liberation, enlightenment, and peace, who guards with unwearying diligence the gateway of his heart.

MIND IS THE ARBITER of life. It is the creator and shaper of conditions, and the recipient of its own results. It contains within itself both the power to create illusion and to perceive reality. Mind is the infallible weaver of destiny. Thought is the thread, good and evil deeds are the "warp and woof" or foundation, and the web, woven upon the loom of life, is character. Mind clothes itself in garments of its own making.

Man, as a mental being, possesses all the powers of mind, and is furnished with unlimited choice. He learns by experience, and he can accelerate or retard his experience. He is not arbitrarily bound at any point, but he has bound himself at many points, and having bound himself he can, when he chooses, liberate himself.

He can become bestial or pure, ignorant or noble, foolish or wise, just as he chooses. He can, by reoccurring practice, form habits, and he can, by renewed effort, break them off. He can surround himself with illusions until Truth is completely lost, and he can destroy each of those illusions until Truth is entirely recovered. His possibilities are endless; his freedom is complete.

It is the nature of the mind to create its own conditions, and to choose the states in which it shall dwell. It also has the power to alter any condition, to abandon any state. This it is continually doing as it gathers knowledge of state after state by repeated choice and exhaustive experience.

Inward processes of thought make up the sum of character and life. Man can modify and alter these processes by bringing will and effort to bear upon them. The bonds of habit, impotence, and sin are self-made, and can only be destroyed by one’s self. They exist nowhere but in one’s mind, and although they are directly related to outward things, they have no real existence in those things.

The outer is molded and animated by the inner, and never the inner by the outer. Temptation does not arise in the outer object, but in the lust of the mind for that object. Nor do sorrow and suffering belong by nature to the external things and happenings of life, but in an undisciplined attitude of mind toward those things and happenings.

The mind that is disciplined by Purity and fortified by Wisdom avoids all those lusts and desires which are inseparately bound up with affliction, and so arrives at enlightenment and peace.

To condemn others as evil, and to curse at outside conditions as the source of evil, increases and does not lessen, the world’s suffering and unrest. The outer is but the shadow and effect of the inner, and when the heart is pure all outward things are pure. 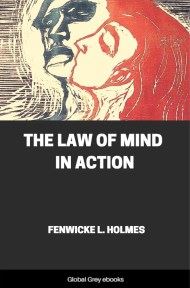 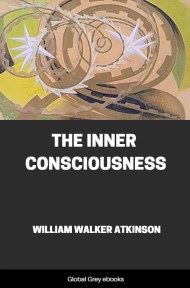 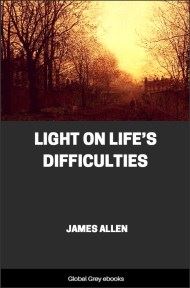 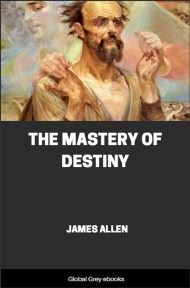 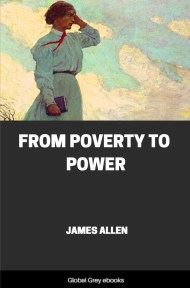 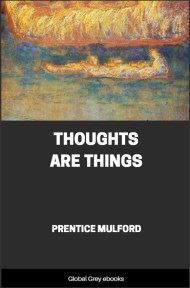