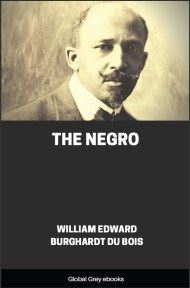 William Edward Burghardt Du Bois was born in 1868, 3 years after the end of the civil war. He worked his whole life to bring an end to segregation. He died in 1963, one year before the march on Washington. This book covers vast amounts of African history including the history of Ethiopia and Egypt, the Niger and the advent of Islam, the Guinea and the Congo, Africans in the West Indies and Latin America and Africans in the United States. There are also a couple of chapters on the slave trade and the problems faced by Africans. A very important book, anyone looking to glimpse into the history of Africa and it's people would do well to read this.

This book has 162 pages in the PDF version, and was originally published in 1915.

Production notes: This e-book of The Negro was published by Global Grey in 2018.