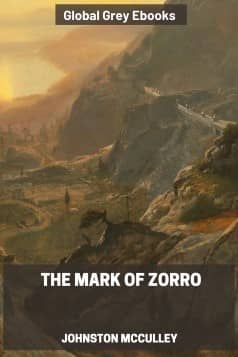 The Mark of Zorro by American author Johnston McCulley first appeared as a magazine serial under the title The Curse of Capistrano in All-Story Weekly in 1919. It was later published in book format in 1924 under the new title The Mark of Zorro. This was the first of McCulley's works to feature the character of Diego Vega, the mask wearing hero known as Zorro. The title of this book is in reference to the way our hero marks his enemies - three sword cuts that form a 'Z'. In 1920, the story was made into a silent film that was hugely successful, which led the author to creating a whole series about the character.

Set in early nineteenth-century California before it became a U.S. state and was ruled by Mexico, the book tells the story of Diego, along with his servant Bernardo, and his lover Lolita Pulido and their adventures fighting the evil Captain Ramon and Sgt. Gonzales who rule the native people with cruelty and oppression.

This book has 154 pages in the PDF version, and was originally published in 1924.

Production notes: This ebook of The Mark of Zorro was published by Global Grey on the 5th October 2021. The artwork used for the cover is 'View of Donner Lake' by Albert Bierstadt.