This is volume 2 of the Barddas of Iolo Morganwg. This volume, which ends abruptly mid-sentence, is essentially a set of bylaws for the organization of Welsh Bards. While it does not have the depth and curious lore of the first volume, it is of some historical interest.

This book has 78 pages in the PDF version, and was originally published in 1874.

1. The principal usages of the Bards of the Isle of Britain are to 'maintain the memory and teaching of peace, truth, and justice in a country, and to bestow praise upon the good, and dispraise upon the bad; and all this by means of Awen from God.

3. There are three kinds of Primitive Bards. The Bard positive, of original appointment, or a Poet, in virtue of discipleship, whose duty it is to preserve order and rule, in respect of the Privilege, Usage, and Voice of Gorsedd, so that Bardism be not lost, but be maintained and preserved, in right of original usage, uncorrupt and unchanged. And it is incumbent upon a Poet to sing praise and dispraise, according to what is just and requisite, and, by means of song and oration, to preserve the memory of the Privileges and Usages of the Bards of the Isle of Britain, and their appurtenances. A Poet is adjudged to be one of presidency after three Chairs, that is, when he shall have gained the privilege of three Chairs; and every office and employment, in respect of song and Bardism, are free to him in virtue of his Chair; and he may exercise the function of Poet, Ovate, and Druid, as he pleases, in virtue of occasion, without a degree, without a grant. In this particular he is the chief of the Bards, and no one can be made master of song who is not a presiding Bard. His dress is to be of serene sky blue, and unicoloured, for unicolour is of the same hue as truth, and the serene sky blue is of the same hue as peace, a Poet, or a privileged Bard, being a man of peace and truth;--he is also called a Licensed Bard, a privileged Licentiate, and Primitive Bard positive. Nor is it lawful for him to bear arms, nor for any one to bear a weapon, where he may be in his unicoloured vestment, by which he is to be distinguished. The second of the primitive Bards is the Ovate, and it is incumbent upon him to be acquainted with literature, that is, to read and write, and to know the kinds of arts which may be beneficial to Bards and to the world, and to exhibit them in their authenticity before a Gorsedd or Chair, or a Bard of presidency. It is incumbent upon him, also, to collect and to search for knowledge, and to impart instruction in it, after it shall have obtained the judgment and privilege of Gorsedd; he is not bound to do more, except in virtue of a degree and grant. 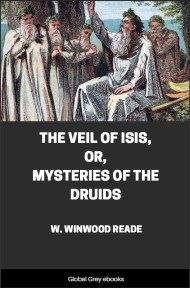 The Veil of Isis, Or, Mysteries of the Druids

Aradia Or the Gospel of the Witches