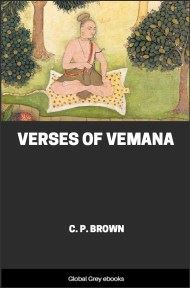 Kumaragiri Vema Reddy popularly known as Vemana was a great Telugu philosopher and poet, who lived sometime in the seventeenth century. He composed numerous poems in the vernacular of Telugu. His poems are four lines in length. He traveled widely across south India, acquiring popularity as a poet and Yogi. So high was the regard for Vemana that a popular Telugu saying goes 'Vemana's word is the word of the Vedas.

This book has 179 pages in the PDF version, and was originally published in 1829.

Production notes: This ebook of Verses of Vemana was published by Global Grey in 2018.