Available in PDF, epub, and Kindle ebook. This book has 68 pages in the PDF version.

No Animal Food, and Nutrition and Diet, with Vegetable Recipes, is a book by Rupert H. Wheldon. It contains information on vegetarian diets, including the health aspects of a plant based diet, as well as various recipes.

Excerpt from No Animal Food

Outside of those who have had the good fortune to be educated to an understanding of a rational science of dietetics, very few people indeed have any notion whatever of the fundamental principles of nutrition and diet, and are therefore unable to form any sound opinion as to the merits or demerits of any particular system of dietetic reform. Unfortunately many of those who do realise the intimate connection between diet and both physical and mental health, are not, generally speaking, sufficiently philosophical to base their views upon a secure foundation and logically reason out the whole problem for themselves.

Briefly, the pleas usually advanced on behalf of the vegetable regimen are as follows: It is claimed to be healthier than the customary flesh diet; it is claimed for various reasons to be more pleasant; it is claimed to be more economical; it is claimed to be less trouble; it is claimed to be more humane. Many hold the opinion that a frugivorous diet is more natural and better suited to the constitution of man, and that he was never intended to be carnivorous; that the slaughtering of animals for food, being entirely unnecessary is immoral; that in adding our share towards supplying a vocation for the butcher we are helping to nurture callousness, coarseness and brutality in those who are concerned in the butchering business; that anyone of true refinement and delicacy would find in the killing of highly-strung, nervous, sensitive creatures, a task repulsive and disgusting, and that it is scarcely fair, let alone Christian, to ask others to perform work which we consider unnecessary and loathsome, and which we should be ashamed to do ourselves.

Of all these various views there is one that should be regarded as of primary importance, namely, the question of health. First and foremost we have to consider the question of physical health. No system of thought that poses as being concerned with man's welfare on earth can ever make headway unless it recognises this. Physical well-being is a moral consideration that should and must have our attention before aught else, and that this is so needs no demonstrating; it is self-evident.

Now it is not to be denied when we look at the over-flowing hospitals; when we see everywhere advertised patent medicines; when we realise that a vast amount of work is done by the medical profession among all classes; when we learn that one man out of twelve and one woman out of eight die every year from that most terrible disease, cancer, and that over 207,000 persons died from tuberculosis during the first seven years of the present century; when we learn that there are over 1500 defined diseases prevalent among us and that the list is being continually added to, that the general health of the nation is far different from what we have every reason to believe it ought to be. However much we may have become accustomed to it, we cannot suppose ill-health to be a normal condition. Granted, then, that the general health of the nation is far from what it should be, and looking from effects to causes, may we not pertinently enquire whether our diet is not largely responsible for this state of things? May it not be that wrong feeding and mal-nutrition are at the root of most disease? It needs no demonstrating that man's health is directly dependent upon what he eats, yet how few possess even the most elementary conception of the principles of nutrition in relation to health? Is it not evident that it is because of this lamentable ignorance so many people nowadays suffer from ill-health?

Further, not only does diet exert a definite influence upon physical well-being, but it indirectly affects the entire intellectual and moral evolution of mankind. Just as a man thinks so he becomes, and 'a science which controls the building of brain-cell, and therefore of mind-stuff, lies at the root of all the problems of life.' From the point of view of food-science, mind and body are inseparable; one reacts upon the other; and though a healthy body may not be essential to happiness, good health goes a long way towards making life worth living. Dr. Alexander Haig, who has done such excellent and valuable work in the study of uric acid in relation to disease, speaks most emphatically on this point: 'DIET is the greatest question for the human race, not only does his ability to obtain food determine man's existence, but its quality controls the circulation in the brain, and this decides the trend of being and action, accounting for much of the indifference between depravity and the self-control of wisdom.'

The human body is a machine, not an iron and steel machine, but a blood and bone machine, and just as it is necessary to understand the mechanism of the iron and steel machine in order to run it, so is it necessary to understand the mechanism of the blood and bone machine in order to run it. If a person understanding nothing of the business of a chauffeur undertook to run an automobile, doubtless he would soon come to grief; and so likewise if a person understands nothing of the needs of his body, or partly understanding them knows not how to satisfy them, it is extremely unlikely that he will maintain it at its normal standard of efficiency. Under certain conditions, of which we will speak in a moment, the body-machine is run quite unconsciously, and run well; that is to say, the body is kept in perfect health without the aid of science. But, then, we do not now live under these conditions, and so our reason has to play a certain part in encouraging, or, as the case may be, in restricting the various desires that make themselves felt. The reason so many people nowadays are suffering from all sorts of ailments is simply that they are deplorably ignorant of their natural bodily wants. How much does the ordinary individual know about nutrition, or about obedience to an unperverted appetite? The doctors seem to know little about health; they are not asked to keep us healthy, but only to cure us of disease, and so their studies relate to disease, not health; and dietetics, a science dealing with the very first principles of health, is an optional course in the curriculum of the medical student. 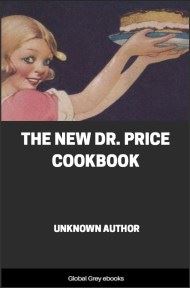 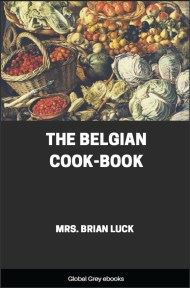 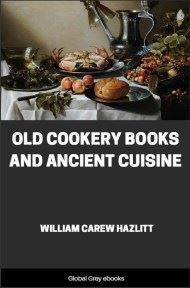 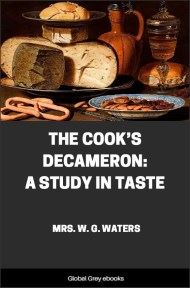 The Cook’s Decameron: A Study in Taste 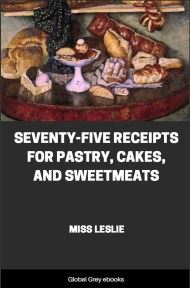 Eating for Health and Strength 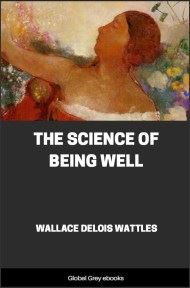 The Science of Being Well