Don't want to donate? You can also support the site by buying a collection, such as the Politics, Society, Science, and Philosophy one, with 70 ebooks for only £4.00

This is Volume 1 of 4 - The Anti-Christian Conspiracy. It examines the anti-Christian conspiracy that was begun by Voltaire in 1728. Barruel found that the philosophers had created an age of pretend philosophy which they used in their battle with Christianity. Their commitment to liberty and equality were really commitments of 'pride and revolt'. Barruel claimed that the proponents of the Enlightenment led people into illusion and error. He alleged that Voltaire, d'Alembert, and Frederick II, the King of Prussia, planned the course of events that lead to the French Revolution.

The History of a Lie 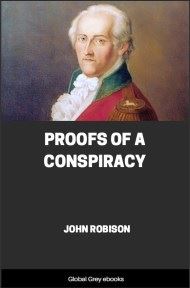 The City of the Sun