I love Dara Ó Briain, but when it comes to mysterious and unexplained phenomena that science can't explain, one of the most fun things to do is to actually fill in the gaps with whatever appeals most to us. Sure, we can finally hear science out when it comes up with an answer, but until then? Go for it - aliens, fairies, zombies, underwater cities, flat earth, Freemasons, Cthulhu, whatever. But if you're becoming a bit bored with the usual run-of-the-mill mysteries that have been either solved or that already have a popular paranormal attribute associated with it, never fear - here are ten things that right now, are up for grabs when it comes to explanations and theories. Let your imagination go crazy.

Note: The pictures used in this article are all terrible. They were created by me. It's fine. I know my strengths. Creating images isn't one of them.

Ashen light is a subtle glow that can be seen on the night side of the planet Venus. It was first recorded in 1643 by the astronomer Giovanni Battista Riccioli who thought it was due to the telescopic light refraction. Pfft - no imagination whatsoever Giovanni! It has been observed by many more people since and is often seen when Venus is in the evening sky.

When I heard of this, I was thinking of something like this: 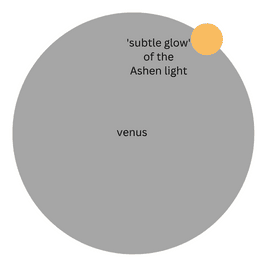 However, it actually looks more like this, which is far more impressive: 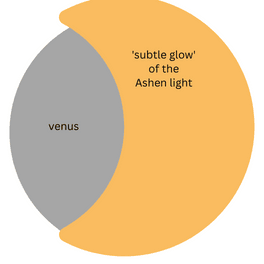 You can see an actual photo of the Ashen light here (scroll down to the bottom of the page), or you can be content with my magnificently constructed illustrations above.

Circular patches of barren land that appear in otherwise healthy grassy vegetation. The circles range from 2 and 15 metres (7 and 49 ft) in diameter. It was thought that they only occurred in Western parts of Southern Africa until 2014 when they were discovered in Western Australia as well.

A poor representation of fairy circles

Apparently, the circles pass through a life cycle of 30 to 60 years, becoming noticable at around 2 metres in diameter. Once they reach the maximum diameter, they 'die' as grass takes over them again.

Sand termites, lack of plant nutrients, etc. Not many theories for these and even the sand termites theory has been criticised for 'confusing correlation with causation'.

Well, quite obviously - fairies. It's literally in the name.

At about eight o'clock in the evening on the 3rd November 1888, across Reading in Southern England, thousands of sheep ran from their fields and their dwellings and were found the next morning, scattered around wide areas miles from where they had been left. Some of them were still panting in terror at whatever sent them into a panic in the first place. All in all, across around 200 square miles, sheep went a bit crazy.

There were no earthquakes that night and no-one noticed anything odd. Interestingly enough, it happened again in 1889, and again in 1893.

Darkness. Apparently that night between 8 and 9 P.M. such 'a thick and heavy darkness came on that a man could not see his own hand'. Another witness wrote that a little before 8 o’clock there was an extraordinary black cloud travelling...which appeared to be rolling along the ground.

Aliens - the 'dark cloud' that rolled along the ground was actually a cloaked UFO.

Similar to the above incident, but of the human variety, and with actual illnesses. The Hollinwell incident occurred in July 1980 when 300 children suffered fainting attacks, nausea, dizziness, and other symptoms.

According to witnesses, whilst performing in a brass band competition, children began 'falling down like nine pins'. Altogether there were about 300 victims, with 259 being taken to local hospitals. An official inquiry ruled it was a case of mass hysteria, which seems a bit insulting, as the victims were adamant that their symptoms were real.

Deliberate government testing of some nasty chemicals. I did almost write 'aliens' again there to be honest though.

La Mancha Negra ('the black stain') is a mysterious black substance that first appeared in 1986, and which oozes from roads in Caracas, Venezuela. It is responsible for many car accidents and has claimed many lives. When it was initially seen, it was a smudge 50 yards long, noticed by workers as they repaired asphalt on a highway.

The blob didn't cause much concern to start with but then it began to spread and pretty soon, as much as 8 miles of highway were covered with it. It grows when conditions are hot and wet, and shrinks when it is cold and dry.

The Venezuelan government has spent millions of dollars investigating the substance, brought in experts from the U.S, Canada, and Europe, tried washing it away, tried scrubbing it away, and tried repeatedly scraping it away (it just reappeared). Finally, they poured tons of pulverised limestone over it, in what seems like a final, exasperated, 'sod this' move, which seemed to work until 1996 when it came back again.

"After 14 years of study, no one knows what the stuff is, where it comes from, or how to get rid of it." Well done, science.

God knows - the black oil stuff from the X-Files?

Rather surprisingly given the name, the Cuban Underwater Formation is an underwater formation in the waters off the coast of Cuba. Sonar images first recorded in 2001 showed symmetrical and geometrical stone structures that looked very much like an urban complex, at depths of around 700 metres.

Further study of the site with remote operated vehicles showed what was interpreted as various pyramids and circular structures made of huge blocks of stone. Marine engineer Pauline Zalitzki, who reported the discovery, said "It's a really wonderful structure which really looks like it could have been a large urban centre. However, it would be totally irresponsible to say what it was before we have evidence."

Irresponsible? Or vindication for all those people who believe in lost cities and ancient technologies?

They don't know. Not enough evidence, blah blah blah. Science and its need for evidence.

Obviously a second Atlantis type thing. Or maybe an alien base, set up in the knowledge that they would be safe and hidden there. Which they were until nosy marine engineers came along.

Probably the most famous one on this list, the Wow! signal was a signal that was detected on August 15th 1977 by Ohio State University's Big Ear radio telescope in the United States, then used to support the search for extraterrestrial intelligence. Appearing to come from the direction of the constellation Sagittarius, the entire signal sequence lasted for 72 seconds and it remains the strongest candidate for an extraterrestrial radio transmission ever detected.

Not my creation - this is an image of the actual Wow! signal original printout

The name comes from the fact that astronomer Jerry R. Ehman was so impressed by the signal that he wrote 'Wow!' beside it on the printout.

The adorably named 'Blob' is a large mass of warm water in the Pacific Ocean off the coast of North America that was first detected in 2013. After spreading in 2014 and 2015, it seemed to disappear, only to resurface in 2016, at which point, according to Wikipedia, it 'made itself known to meteorologists' - which brings to mind the image of it waving at them or something.

Unusual for ocean conditions, the warm blob of water also affected marine life due to its lack of nutrients. Starting off at a reasonable 500 miles wide, it later expanded and doubled in size. There appeared a second blob (known as The Blob 2.0) in 2019, and in 2021, a 'Southern Blob' was discovered near New Zealand.

Marine heatwave, whatever that is.

Heat from the chimneys of the city that apparently exists under the waters of Cuba.

A ghost ship that is said to sail through the waters in Eastern Canada. With a legend dating back 200 years, the ship has three or four masts, all of which are said to be engulfed in flames by those who witness it. According to local folklore, the appearance of the ghost ship forewarns of a storm.

In 1900, a group of sailors saw the ship and raced towards it, ready to rescue the people onboard, only to see it vanish when they got near to it. It has been seen as recently as 2008 when 17-year-old Mathieu Giguere told a local newspaper he saw the legendary phantom ship in the Tatamagouche Bay, describing it as a "bright white and gold ship".

A ghost ship, destined to forever ride the waves and forecast storms.

The Forest Grove sound was a mysterious high-pitched mechanical noise that plagued the residents of Forest Grove, Oregon throughout February 2016. Described by the Washington Post as sounding like a 'giant flute played off pitch', the noise lasted from ten seconds to several minutes. Around 200 calls were made to the local Police department, a lot of which were apparently made not only to report the noise, but to give opinions on what was causing it. Frogs, aliens, and Bigfoot, in case you were wondering.

The City of Forest Grove Public Works Department, and the Fire Department were unable to explain the noise, and Andrew Dawes, a professor of physics at Pacific University, mapped the locations where the noise had been heard, but could not pinpoint it to an exact location. After determining that apart from being annoying, the sound didn't pose a safety hazard, the local Police announced they were closing investigations. Lucky for them, after February was over, the noise wasn't heard anymore anyway.

Hmmm - a massive mechanical E.T who was calling for his alien brothers and sisters to come and get him, and finally, as March was approaching - they did.

The Swedish Twins Who Ran into Traffic

My Own Experiences with the Paranormal

The Loss of a Beloved Pet

Free Courses You Can Take Online